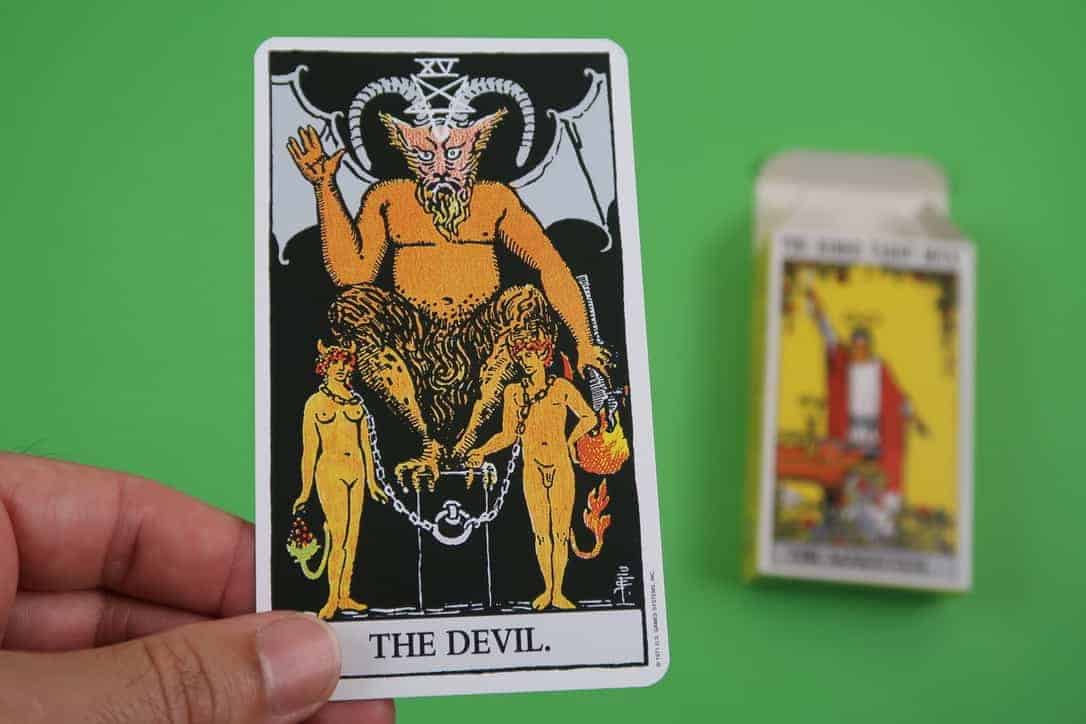 The Devil upright tarot card represents the excess in one part of our lives. We may be too addicted to one thing that should be restricted.

Case in point: When we look at society as a whole, they are addicted to their smartphones and social media. Through restriction, we can find more harmony with each other.

The world certainly is going through some interesting times. We are certainly different than we were 10 years ago. Unfortunately, the world isn’t really going in the right direction.

Perhaps the Devil really has a hold on our evolutionary growth. Society should be standing up to him…but they aren’t! Many of them might be too far gone.

While many of us aren’t using drugs or alcohol, we’re still addicted to other vices. In fact, we’re addicted to information like never before. This is perhaps too much for our developing minds to really take in.

The Devil Upright is a ‘Yes’ Tarot card. We see here Baphomet depicted who is apart of the occult and is known today as being evil, though he has a more balanced representation in times gone by.

Chained to the podium is the naked man and woman who have found themselves in this situation against their will. Then again – are those chains really on that tight? Not really.

They have horns which mean that they are becoming just like The Devil. They have been in his posession for far too long, and this is further exemplified with their tails. Their under his control, but seemingly unaware that they can escape at anytime.

We they have to ask ourselves: Can’t we just escape his grip? Inheritly we can…if only we knew how!

The inverted pentagram represents the darkness of magic. Certainly this card is one of negative outcome and leads down a dangerous path. For many psychic readers and fortune tellers, they’ll often leave this card out of their stack and shuffling.

The two individuals pictured have become addicted to the charm of the devil. They are attached and seemingly unaware of what is truly happening. Soon they will be fully converted and under his spell for life.

This tarot card is helping you to highly what is entrapping you. What are you currently addicted to which is impairing your function through life? Have you become dependant on someone or a certain tool (such as Netflix) to help you get through each and every day.

You’ll want to avoid selling yourself to the devil. It’s not too late to become consciously aware of what is happening to you and the world around us. The devil is taking the opportunity to posess as many people as he can.

He does this quite easily with many people volunteering to hand themselves over. Look at the negativity on news sites and the constant fighting on social media. Have you read negative YouTube comments? It’s reckless!

This process of healing for you won’t be easy. Getting sucked in through his charm was the easy part, and now you’ll have to backpedal. This is going to take enormous willpower and focus, as well as desire. Admitting that you’re stuck is the first step towards resolving this problem.

Just remember that this negative spiral hasn’t been serving you, or else, why are you here reading this tarot card reading? There is clearly a problem and it’s time for you to rise and defeat his temporary possession of your soul!

Many people in the new age movement talk about creating a safe space and certainly this is a wise idea. One where creativity and joy sparkle and where you can avoid conflict and addiction.

To start, you may have to develop a safe space at home to start moving away from his grip. This personal boundary will be conducive to your growth and he’ll relentlessly be attempting to break it down. Stick to your freedom plan and there’s just to much at stake to allow him back into your life.

For now, the devil has a firm grip on you…but it’s time to fight his grip and let him go!