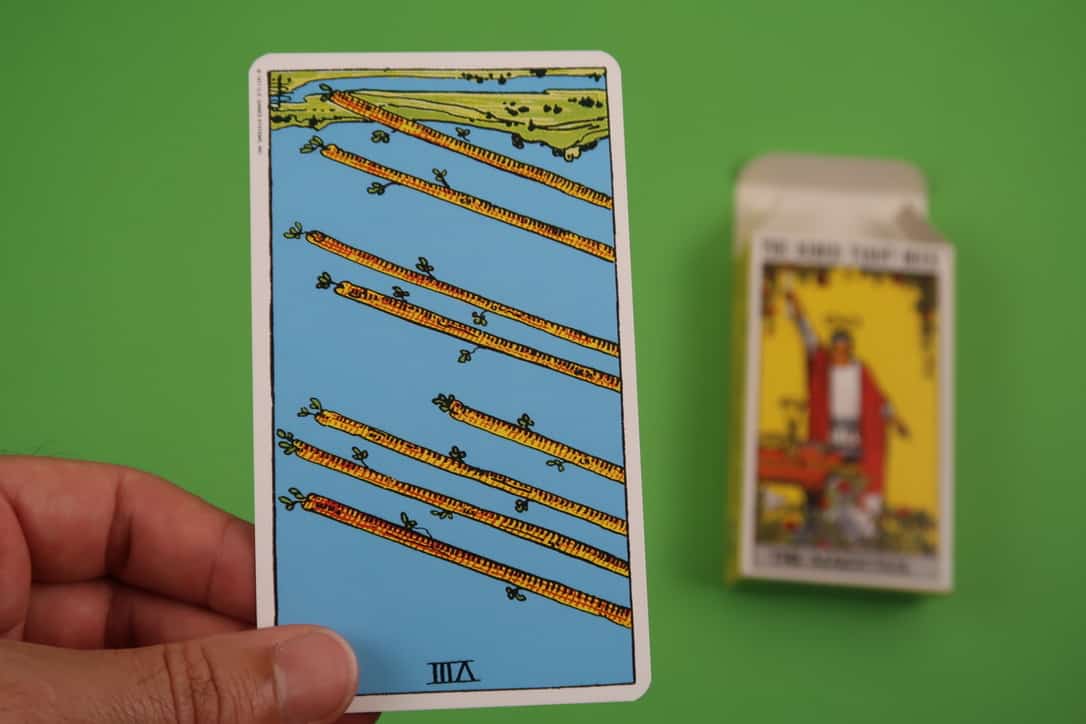 The Eight of Wands is quite a simple card to understand. It means to take one breathe in and exhale – everything is going according to plan.

The Eight of Wands Reversed

Unlike many other tarot cards, we don’t have to do much here in this physical experience. We are likely to be exactly on the right path. Yes! One that we have envisioned for years.

Eight sticks in the air seems odd for a tarot card in the Rider Waite series. However, The Eight of Wands makes perfect sense once you understand the journey of self fulfillment. This card has no people and thus progress (or lack thereof) should not be taken personally. We simply just need to keep moving forward.

Those years of hard work are really starting to pay off. There is no need to re-center or retreat. Really – let’s pick up the pace a little here. We’re built for this.

Sure, there’s still the odd challenge. Whether that’s tasks to complete, people to manage or bills that need paying – we have activities on the to-do list. Let’s not forget we’re actually right on track but need the occasional adjusting.

Let’s have a good look here. 8 sticks on a tarot card, paired with a branch and some water.

Those sticks on the Eight of Wands Reversed are going dead-straight. That’s flow and flying on the right path. We can see that as they’re in perfect unison.

Now we have water to emphasize that flow. Instead of fighting the flow, we need to get into the flow-state. Abraham-Hicks would call this the vortex.

This card is always a pleasure to read towards others. The sheer optimism and joy shared with individuals is captivating, but there is always some slight tuning needed.

Let’s look at these 3 points:

In reality, most individuals won’t need to question their current trajectory. Even if they do, only minor pivots on the spiritual pathway are needed.

Flowing through the air and water has relatively low resistance. As you’ll note, the sticks are also quite thin with very few off-branches. That’s a hint: They’re going for a target and there’s nothing holding them back.

You might feel like life has or is about to really speed up. That momentum might catch you by surprise, but don’t fight it. Better yet – dance with it.

Life is going in the direction that you always envisioned. Maybe it’s a new calling, a new business or a new relationship. That thing that’s been on the vision board for years – it’s starting to happen.

You’ve found a source of personal power. From here, you can stack this from strength to strength. There is little holding back your super powers.

It’s not often that we need only to make mild improvements on the path. For many, The Eight of Wands Reversed is a favourite card that shows us the result of our hard work and effort.

We’re on the right path. One that’s productive, fun and channeled towards a target. There isn’t much slowing us down.

We have the luxury of taking a break or treating ourselves to a vacation. Equally so, we might want to return to our heart centre for a moment of gratitude. “I’ve found myself!”

This is akin to acquiring happiness without needing to be uber-successful. You’re on the right path – just keep up that momentum.

Stay centered and true to yourself. You’ve found the pathway towards grace, ease, focus and abundance.

Keep going – it’s worth it up there!