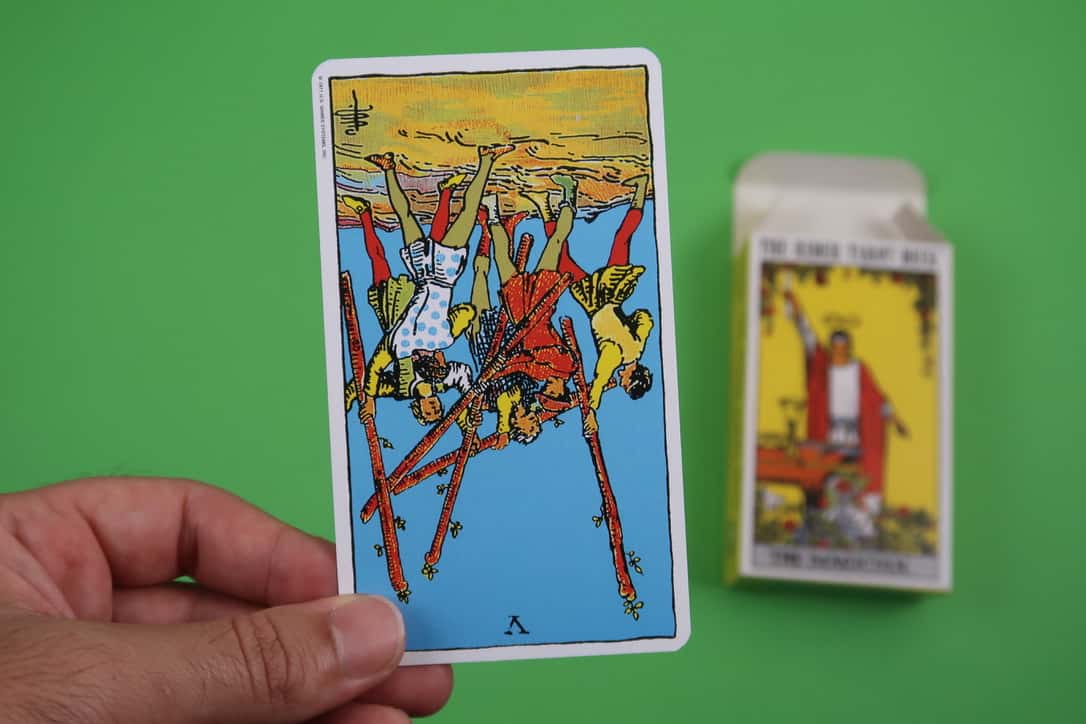 The Five of Wands reversed has a clear meaning: We’re constantly competing with others, but most importantly – ourselves. We need to cease fire for a moment!

Society has created a sense of status or class. As such, we’re compared with each other and must excel at what we do as children do, but we’re adults. It’s time to take a pause.

The Five of Wands Reversed

True happiness is found internally. We all know this, but why do we strive for more? Is it a concept that society has created for us or an internal dialogue that we must be the best at our craft?

We believe that all skills acquired should be unique to us. There is no need to compare or ambitious pursuits to the same pursuits held by others. Competition isn’t necessary – there is so much to go around in this world.

Another challenge – the setting of high standards. If you’re struggling with self-esteem issues, this could be a reason why. Either you set those standards, or someone close to you in your younger years. Now – in this moment – it’s coming to the surface.

To analyze the Five of Wands reversed, we used the Rider Waite series. Each tarot deck has similar meanings from our experience.

We see on this card a group of older children competiting. It almost seems like these are adults.

Instead of competing, they could better collaborate, but something doesn’t allow them. Instead, they’ll keep playing all day and night with the sticks hoping to be better than the other.

It’s a game of win and lose. In this group, there can only be one winner. How do you think this will affect the self-esteem of all the losers? What if such issues are carried into adult life?

There is no longer a need to be better than anyone else. We’re grown ups now.

It’s time to let go of the judgement. That’s really two-fold: The judgement internally and the judgement externally. Others may project judgement upon ourselves, but we have the willing right to ignore this!

Judgement stirs up such stark and negative emotions within individuals. You’re bigger than that.

Instead, it’s time to move into the light. To see your self-worth as higher than any competition out there. Beyond this – you can help others to see that same light and praise their worthyness, instead of defeating it.

Ego struggles are just that – struggles. These are brought on by the way that society has conditioned us. They want us to compete! Our friend, you don’t need to compete and that starts with letting go of such judgement.

You’re so much more

Comparision is evil. We don’t need to compare ourselves to others, including those below us.

If we are to ascend this ladder, we need to equip ourselves with better mental tools. One that works best is seeing the unique qualities we have while keeping that to ourselves.

You have so much more that the world needs right now. Instead of competing, it’s time to cooperate. What can you do in your local community to those who need the most help right now?

You have your own strengths and gifts that others need. Excellence comes from such cooperation and helping those with your talents and skills.

The Five of Wands reversed is a clear representation of both society and individuals, but you don’t need to subscribe to such challenges. You have your own light to shine and your own talents.

That starts with love. These children are fighting, not loving. They’re trying to get more. Instead, they could all get more if they simply worked together.

By not comparing themselves, this could all start in this moment.