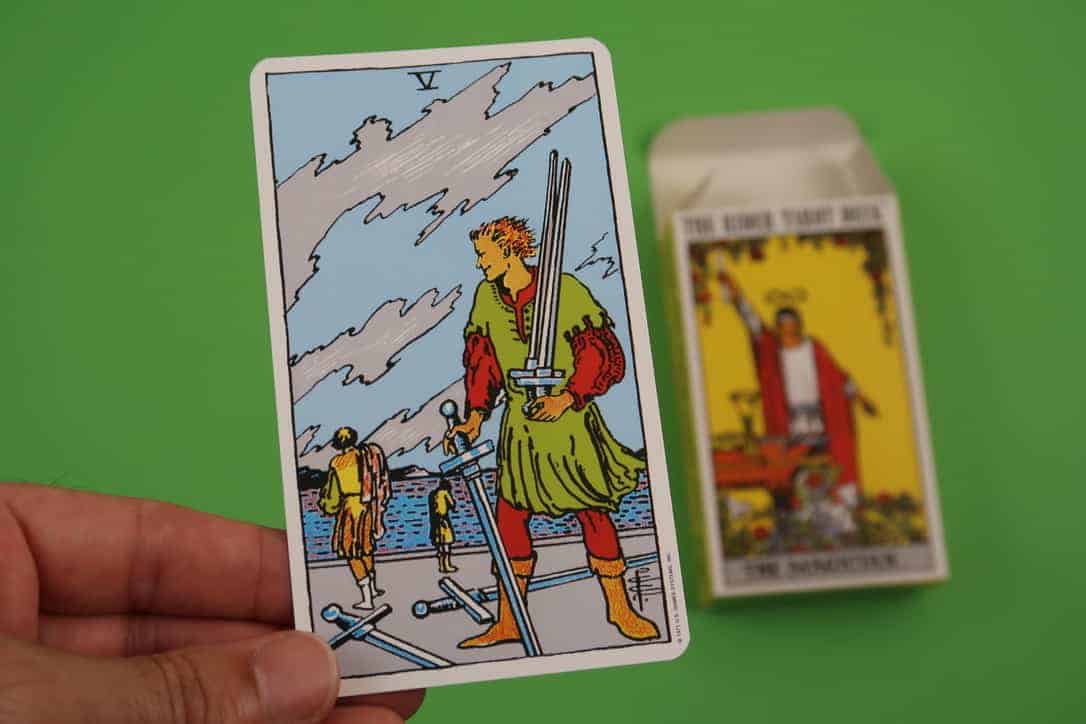 The Five of Swords Upright tarot card represents routine conflict and misunderstandings between two individuals. We may compete to be the more dominant of the two, or succumb to the submissive.

The Five of Swords Upright Meaning

In life, we routinely will come across people who get under our skin. These people might actually be our spouse who challenges us through disagreements. We want to be right, and they want to be right.

Ultimately, someone has to admit defeat yet no one else. This is why conflict resolution is becoming increasingly popular as a topic. People seek to resolve their conflicts peacefully.

A peaceful world is a happy world, yet we will need to sort through our differences to eventually find a resolution. This won’t be an easy process but each party can certainly learn from this experience.

The Five of Swords Upright is a ‘No’ Tarot card. Our reading has been used with the Rider Waite series.

We see the man who holds 3 swords which have been picked up from the ground. He stares over at the two men who have chosen to walk away from the situation that was perhaps hostile.

They have clearly lost this battle and walk with their heads down. They each had 1 sword which they have left behind in their loss. The man remaining seems content in his victory yet hasn’t realized the repucussions of his actions.

We see a cloudy sky. This indicates that, while the fighting is over, the conflict will still continue. A resolution is still some time away, and won’t be ready until the man can avoid the need to be the victor.

You might be the defeated one or the one that feels victorious. Unfortunately, there is no real winner here. Such disagreements or conflicts cause angst and sadness among common parties.

If you share a bond or interest with someone, then you need to peacefully find a resolution. Resist the urge to move into heated arguments or create conflict. It isn’t necessary as it can jeopardise things for the long tierm.

In a love reading, The Five of Swords reminds us to find a common ground. Find a truce and resolve the conflicts that you share with another individual. Seek forgiveness instead of fighting and allow unconditional love to bloom once again.

You’ll also need to accept that you have been wrong, regardless if you have won or lost battles before. Leave the ego at the door and choose to make amendments so you can become more enlightened and share light and love towards others.

Essentially, you should pick the right battles. There are far bigger problems in the world today. These minor conflicts and scuffles are totally unnecessary for your growth and survival.

It’s time to see eye-to-eye. Leave the weapons behind and simply bring your heart and soul to the table. This is the best way to resolve such conflicts between those who you love most dearly.

When we look at countries who had to resolve conflict, their battles showed no real winners. Everyone took a loss. Essentially – find a peaceful platform in which to find peace right now.

Some things have turned sour and it’s time to resolve the conflicts peacefully.