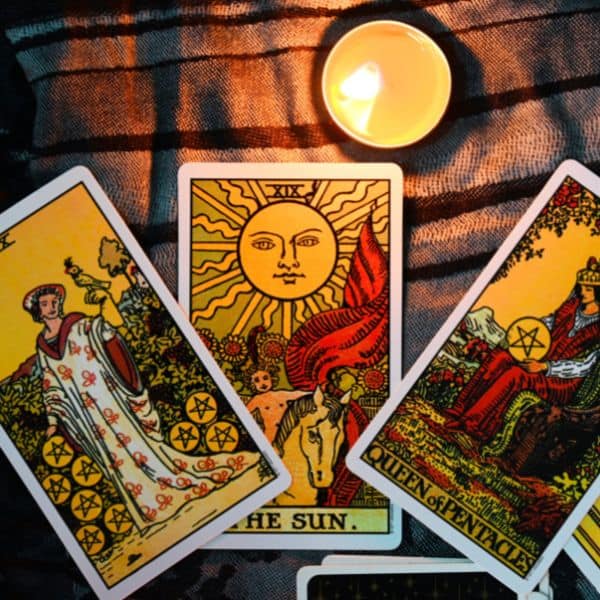 Tarot reading has become more and more fashionable over the last few years, and with that, more people are interested in how to become a tarot reader. If that’s you, with a little help from Psychic Advisor Iain Balmain here’s what you need to know about tarot reading in order to begin!

What are tarot cards?

Tarot cards are the individual cards that form a tarot deck. Tarot cards used to be a parlour game back in the 16th and 17th centuries, but they have since become a very popular tool for divination. Both tarot cards and oracle cards can be used by mystics and tarot readers in order to explore someone’s future.

What are the Major Arcana cards?

The Major Arcana cards are sometimes also called trump cards. They are used in tarot readings to assess and discuss the complex and significant emotions and events in somebody’s life. The major arcana consists of 21 numbered cards and the fool. The fool learns from other cards in the deck on what is known as the fool’s journey, and the other cards have significant influence over the entire reading. They focus on life’s broader lessons and themes, and are the cards that are perhaps most known. They are:

What are the Minor Arcana cards?

In each suit within a tarot deck, there are court cards (King, Knight, Queen, Page) that can represent different things depending on what else is pulled and how the tarot reader interprets them.

These are the suit names in the famous Rider Waite deck (the most common deck) in other, more artistic decks these may change but they will still correlate to the tarot cards within the Rider Waite deck. Usually, artists will provide an explanation of their tarot card meanings to help you to read their tarot decks.

How to become a tarot reader

To become a professional tarot reader, you will need a lot of practice. Learning tarot and how to use your own deck to read into someone’s past, present and future is no small task! Here are the steps you should take to begin:

1. Buy your own tarot deck

The first, and most important step, in getting into tarot reading is to buy your own tarot deck. This can be an ordinary Rider Waite pack, or it might be some artistically designed tarot cards. Pick a deck that you are drawn to, that speaks to you. This might mean that you connect to the imagery, or that you stumble upon it at an opportune time; however you find it, you’ll need a deck that means a lot to you.

All tarot readers will cleanse their tarot cards on a regular basis. This will help to remove any unwanted energy that may potentially affect a tarot card or a tarot spread. You can clean your tarot cards using:

Cleansing your tarot cards should be done regularly, especially if you’ve travelled, if the connection feels off or if you’ve let others use your tarot deck.

To read tarot cards, you will need to ask a question that is clear and open, and then shuffle your deck. Pull your cards for your tarot spread by either cutting and pulling a tarot card from your deck, or by fanning them out. Picking 1 tarot card will give you a simple answer, but picking more for a spread will help you delve deeper into the answer. Lay your cards face down on the table and turn them, one by one, over. Use your intuition to see what comes to mind, what grabs your attention. Use this to craft your own meaning from the spread.

How to know what tarot cards mean

Tarot card meanings are a tricky thing. It is largely done through intuition and the exact meaning of a spread will depend on what you’re asking. For example, the simplest spread is a three-card spread that reflects the past, present, and future. If you were to pull:

You might interpret this as The Empress meaning “nurturing, beauty, abundance”, suggesting your past was filled with love and support. Your present, The Lovers suggests you are loved and valued, your relationships are strong and sturdy, but it also represents choice. Perhaps you are considering a love vs. logic decision; the cards say don’t give up. The future, The Ace of Swords means that a breakthrough is on the way. A positive future is in store for you.

To read tarot cards, you will need to do a certain amount of studying in order to understand the meaning of each card in the deck. Once you have that understanding down, the process is significantly easier!