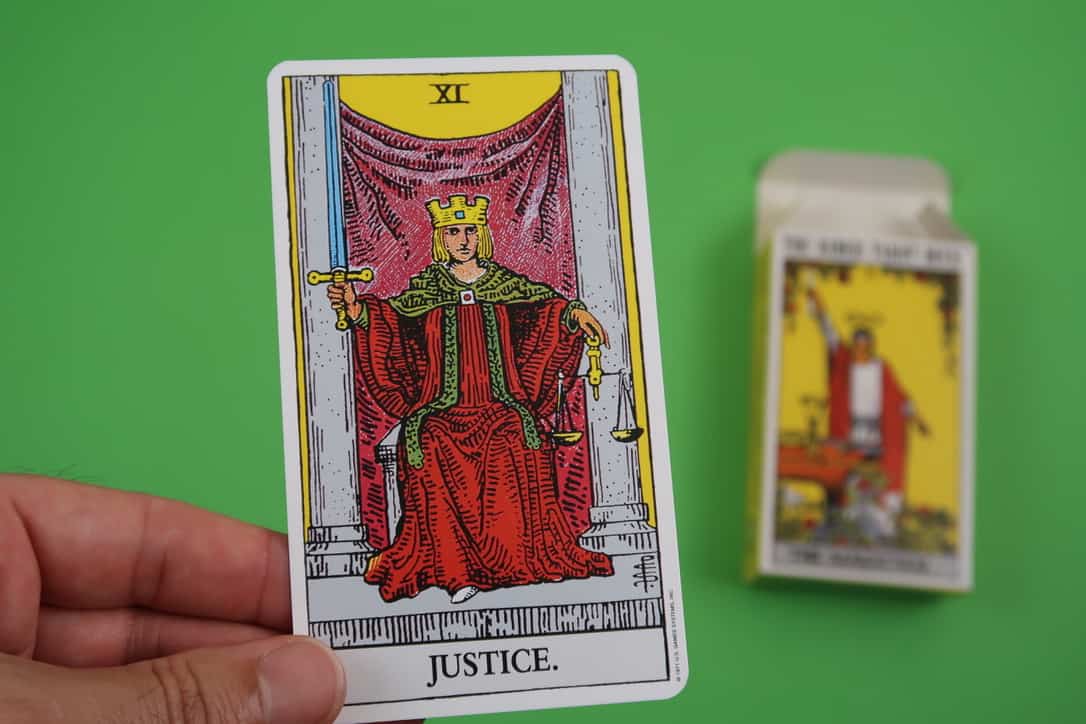 Too often the media gives us the histeria that there is much wrong in the world. Fortunately, the karmic laws of nature are taking over.

As children, we’re taught that there is a disparity in the world. That those who do bad in the world often can get away with such behavours. Fortunately, this isn’t the case. Karma has an interesting way to catch up with those who did wrong.

Justice does prevail though it may take some time. This is the symbolic movement of cause and effect. We’re now living in a fair world where everyone is ultimately rewarded for the good and bad.

If you do good – you will attract good. This is the Law of Attraction in action. The energy that you put out literally comes back to you 10-fold.

The Justice Tarot is a ‘Yes’ Tarot card and we’ve done our psychic reading with the Rider Waite series. It represents the truth and karmic laws of the universe. What we put out simply rebounds.

We see the figure sword and the scales. The sword represents her logical nature which we all need to posess while the scales represent balance. This is where the consequences of her actions are measured.

The crown also has a square on it. Can you see it? This shows the well-ordered thoughts that are possessed in her mind which lead to the greater good in the world.

You’ll also see that she stands between two pillars. This is similar to a modern-day court house where law, structure and justice are all served. If you do good in the world then it’s unlikely you’ll find yourself here.

And the white shoe? Well, that’s divine healing light. It’s there to remind you of your spiritual energy regardless of how severe your actions have been.

What goes around literally does come around. The world today has become significantly more peaceful and those who commit such terrible acts are dealt with more easily given the advancements of technology.

We’re also becoming more intuitively aware of the consequences of our actions – both good and bad. Sadly, what’s missing is still some personal responsibility for the bad. Take for example YouTube comments which are largely quite negative.

There is no need for you to go into the world to seek justice. You don’t need to convince anyone to apologize. The world truly is going into a grand awakening where even the most brazen people are coming into a place of personal transformation. There are endless stories of personal revelation.

We are ultimately intuitive humans that truly feel energy. Have you read one of those negative YouTube comments and felt that energy? You’ll also notice that such comments are becoming less common today as humanity is moving forward.

What’s most important is that you continue ascending. The world needs you to rise and explore the very essence of your giving. Explore new territories both spiritually and physically and continue devleoping that healing light. The world needs more of you.

Heavy is the head that wears the crown. It’s time to take responsibility for your actions and be accountable. As such, you become an example for others to follow with positive consequences.

We live for such a short period of time. There is no need to chase others around. Instead, move forward and create a positive impact on the lives around you with the resources currently available.

It’s evident today that karma is making us more responsible for our actions.