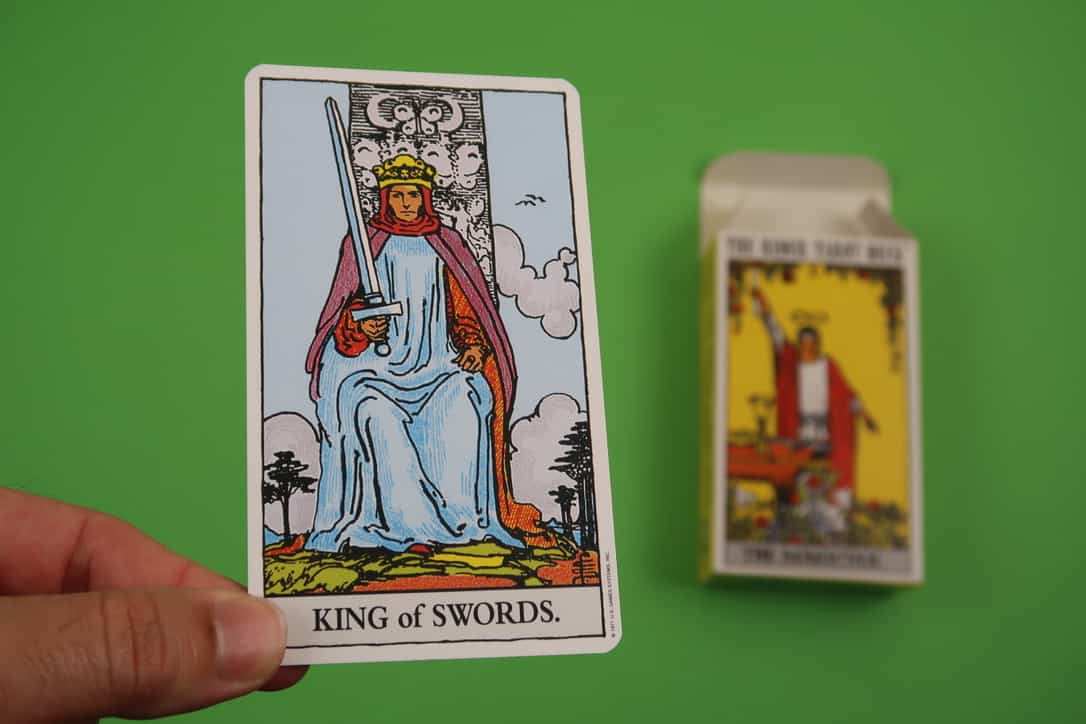 The King of Swords upright tarot card represents the power and authority that we sometimes need to bring to the table. This helps to unpack the truth in the moments of confusion.

The King of Swords Upright

There are times that we really need to step up and be strong. Bringing a dose of realism to the table requires power, strength and authority. It might be uncomfortable but it must be done.

We cannot simply linger and hope things will become alright. It’s our responsibility to step forward into a space of true clarity and personal power when things aren’t going properly.

This sense of confrontation might initially seem uneasy. After all, we are new age people who avoid conflict! Yet we must go internally and find that light to power us through these tense situations.

The King of Swords is a ‘Yes’ Tarot Card and we have used the Rider Waite series. We see the King sitting upon his throne and facing forward. He’s ready to take charge at whatever comes his way.

He wears a blue tunic which represents the need for both spiritual wisdom and logical reasoning, paired with his purpole cape for heart-felt compassion. As a King, he’s certainly one of intellectual wisdom paired with an intuitive mind.

We see the trees in the background are still and solid representing the solid foundations around him. Indeed he’s surrounded mentally by thoughts which can bring upon his true power and message to the people.

When he speaks; they listen. He’s created a sense of stability and certainty among the castle rather than the confusion or instability that comes with those still climbing to the top. Sitting in the throne is no small feat after all.

The King of Swords upright has been through so much and yet he knows more may still come. This is symbolized by the sword he continues to hold despite the protection of his castle men. There’s just no knowing what could happen next and it’s best to be prepared.

From worry to wisdom

We all worry from time to time. We become stuck in different situations beyond our control. Some creep up slowly like the car that is slowly becoming more and more unreliable and needs replacement, and some creep up quickly like the roadrage driver who suddenly appeared on the scene.

It’s from this place of worry that we can actually find wisdom. It’s the wisdom of personal power that can help build a stronger level of emotional intelligence and ultimately carry us through the next struggle.

Such wisdom cannot be learned in merely minutes. We recommend dedicating the better part of a few years to utilize the resources available to enlighten your mind and soul on just how much of a giant you were born to be.

See – we’ve all been masked. Society has knocked us down when we really can be so much more. When yoga teachers remind us to step back into our authenticity, this is what they’re referring to. That state when we were children where we could manifest anything that we desired.

There are many mentors in the world that can help you. The first place to start is the spiritual aisle of any book store where you’ll find some timeless wisdom of those who have transcended this path before.

By acquiring such wisdom, you can be on the front of the battlefield long before they start. You’ll have the conviction that you can make it through whatever life throws at you because you have the authority over your chosen path in life.

As you effectively will soon ‘own’ your life, others will be paying attention to what you have to say. No more poor judgements or decisions. No more falling short on the question. From here on, you’ll be armed with more courage than when you played cowboys and indians as a child.

Naturally, such skills can be used for both good and evil. In this case, we believe that our readers would use such skills to bring about warm energy to the world and defeat the dark energies that linger around.

Instead of waiting for the stars to align, you can immediatley start now. There are plenty of videos on YouTube that discuss the need to build a stronger level of personal courage.

From here, you can begin elevating to a higher plane where it’s simply harder for others to tear you down. And for the rest? They’ll marvel at your elevated level of consciousness and seek assistance in growing into such a divine force for good.

It’s time to stand firm and grow taller as the authority in your space.