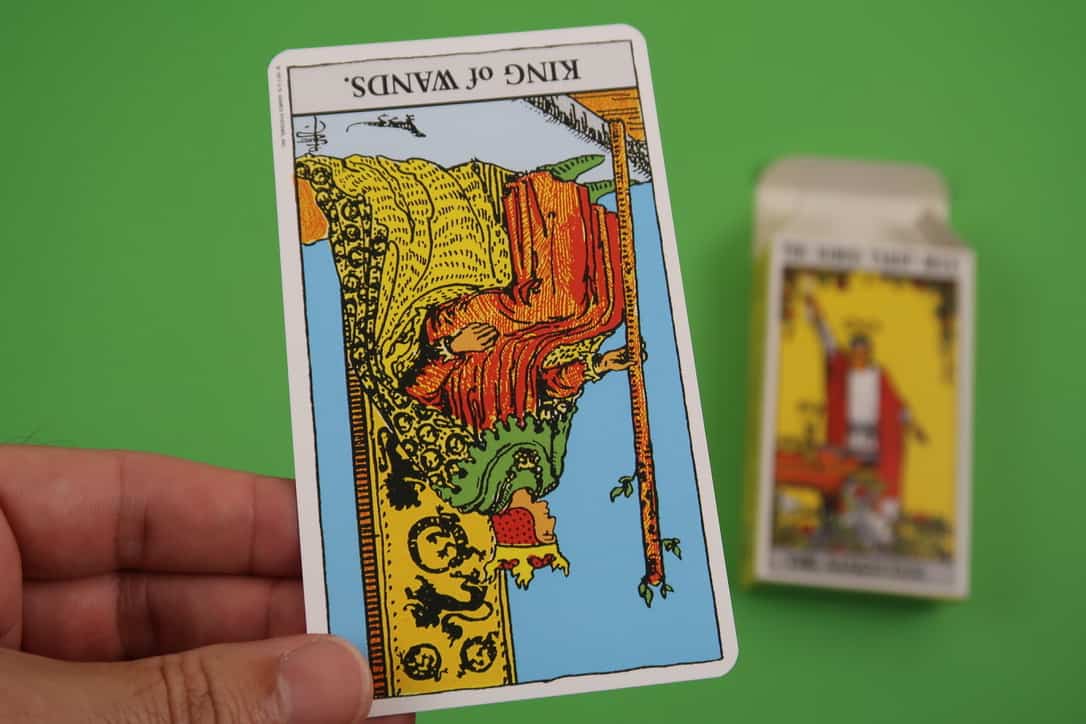 The Kings of Wands reversed is a wise old soul who reminds us to believe in ourselves and our untapped potential on this planetary experience.

If you believe there is more to life then what you’ve already experienced, then this is for you.

The Kings of Wands Reversed

Have you ever felt the power of a true business person or spiritual master? They both share equal traits! Decades of experiences which has brought them to a place of wonderful wisdom.

That same power is found within each and every one of us in this physical experience called life. It’s just power that hasn’t yet been utilized. We’re only running at 10% of our true capacity!

You’re fortunate that you have compentency and can learn. After all – you’re reading a tarot card meaning online that you just found while searching! If you can do this then you have potential for so much more.

Let’s wind back a little and see the things you’ve already accomplished. You’ve made it this far to adult hood. You’ve found the early stages of your spiritual journey while your physical journey is still unfolding.

Believe in yourself and lets go deeper.

We’ve depicted the meaning behind the King of Wands Tarot card using the fantastic Rider Waite series. If you’re new to tarot, this is the gold standard that we would certainly recommend.

We see on this card the king who’s on a throne. Unlike many, he wasn’t born into abundance – he had to go through the hard yards and earn his way to the top. As such, his commands are respect by his subordinates.

The work his done has helped his countrymen win more than their fairshare of battles based on his leadership. Such leadership was based on the belief in himself – that he could do anything he desired.

It’s time to rise. You have personal and untapped power that has been ignored for far too long. Too often in the world we judge ourselves against the priviledges and fortunes of others. Wrong move!

We have our own personal quest. As such, this will require ackowleding your own untapped power and belief in ourselves. It’s all on you.

Will there be naysayers along the way? Absolutely! Will it be easy? Certainly not! Often our biggest doubter will be ourselves – that inner voice that just won’t quieten.

If you are to posess the power of The King whose command saved his nation, you’ll need to cultivate a powerful mindset and relentless work ethic.

No task that lays before you will be easy. Any new opportunities that come your way will appear to be the shortcut to the promised land, but often serve as a mere distraction.

Our best version of ourselves is still to come. Until then, it’s hard work. We’d love to say this will be easy, but it simply isn’t so. Our subconscious mind will try to sabotage us in order to protect us, as will close friends and family.

One must then ask themselves: “Is this worth it?” and for you, the answer lays in the destination. If this is what you envisioned for your life and will positively impact thousands of people – then yes!

There is a strong version of you and a weak version. The King of Wands reversed shows clear meaning that we are to rise up in the face of adversity and accept the strongest version of ourselves.

As with any King, we need to be strong. It’s no longer a time to be passive or simply breezing our way through life.

You have skills, talent and resources that you have been acquiring for years. Perhaps it’s still not enough, or perhaps you have everything you need. Either way – you need to get started.

This quest depends on you and your unlimited personal power.