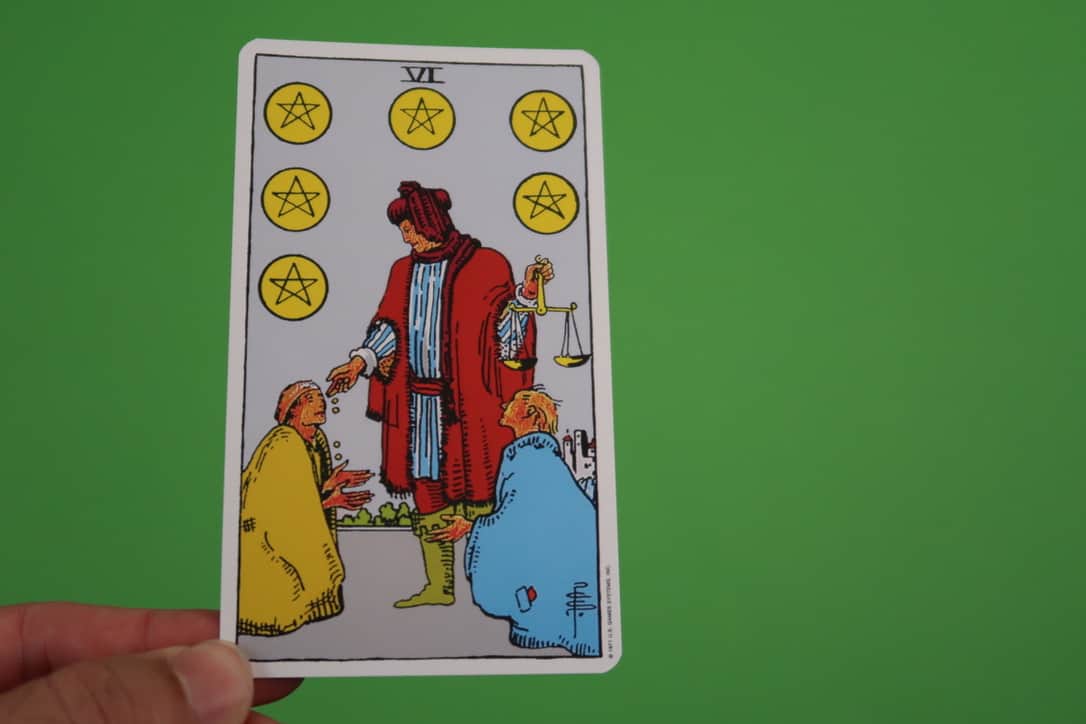 The Six of Pentacles upright represents the need to give others as we also give to ourselves. As we share more, inheritly more things return back to us.

Such generosity doesn’t go unnoticed. For example, we donate to Destiny Rescue often while being a yoga brand that already helps yogis prosper.

As such, we’re rapidly growing as a beautiful bhakti-yoga brand. People trust us and so we’re able to give more.

There are plenty of wealthy people in the world who don’t give. They seem perfectly happy in their shell, but are they? And will the karmic laws of the universe eventually catch up to them?

Perhaps they have already done well in their young years. Perhaps they actually gave their fair share to help people and later accumulated all their wealth. This is why we can’t pass judgement.

Either way – giving is good. It nourishes the soul every time we give money. Whether it’s a few dollars or a few thousand dollars, every dollar donated gets put into good use.

The Six of Pentacles upright is a ‘No’ Tarot card. We’ve used the Rider-Waite series for our readings while you may use any that you desire and draw upon meaning.

We see here a wealthy man depicted. He’s handing out coins to those in dire straits. We also see a balanced scale being held in one of his hands. This represents the need to find balance and harmony in our financial pursuits. We can’t simply be accumulating without giving.

He generously uses his power attained through wealth in a generous manner. There is no judgement. Like them, he was once quite poor and rose up through years of hard work and relentless passion.

This act of giving provides fulfillment for his life. It’s the empty void that has been in his heart for many years. He discovered like many who reach the highs that money doesn’t buy happiness. Giving does as is losing the judgement from others.

Indeed we can’t all simply start handing out big donations. We recommend that you start with yourself. Once your needs are met, then you can help others through such turbulent times.

Self-care is something that fundamentally missed in the world today. Many people aren’t looking after themselves and instead try to save the world. If you have such ambitious goals, start with looking after your own needs first.

This doesn’t necessarily mean becoming affluent and wealthy. You can give a little between now and then while you are building the empire. That little bit of giving does go a long way.

Ensure first that your basic needs are covered. Do you have a safe place to live in? Is there food on the table? Do you have a concrete plan going forward? By creating this safe space, you’ll find it easier to prosper.

When you do give, you should expect nothing in return. While we want to hold out for a ‘thank you’ at the very least, sometimes those in dire straits just aren’t in the best mental space. This doesn’t mean you should cease giving.

We praise the notion of unconditional giving. That is expecting nothing in return for your good deeds. This starts with, as we noted earlier, looking after yourself. If your needs are met, then you don’t need anything in return.

While you can expect nothing, karma has a mighty fine way of showing itself. Those who are selfless in their pursuit often have their abundance magnified. It just takes time, but again – don’t expect anything initially.

We praise charities that put humans before profit. On that same token, we praise companies which take a profit-last mentality. There are also companies which do both really well including Whole Foods. Then we have organizations such as the Hare Krishna community which also uplift the consciousness of their followers.

Be generous with your time, your care for others and your donations. First, though, look after yourself. Build that stable base for you and your family. Accept the giving from others and receive with sheer appreciation. As you do, your world can lighten up considerably.

It’s time to amplify your generousity. This starts today.